A “RETIRED IT PROPERLY” REVIEW

This Cannondale Scalpel SE has been in the quiver for longer than most. In the time since it landed on our doorstep last spring, it has been an absolute workhorse of a test bike, racking up more miles than our SoCal guys have put on a test bike for review, ever. That’s largely a result of the COVID season we’ve had, which for me eliminated typical trail rides and days at the gravity park with friends and replaced them with long solo missions to explore socially distant pieces of trail. However, as the number of long and lonely rides aboard the Scalpel grew, so did my appreciation for how truly capable this thing is. This Scalpel is nowhere near its actual retirement age as a bike, but its time as a test bike must come to an end… so that we may retire it properly (RIP) and tell you what we think.

THE LAB
The SE version of the Cannondale Scalpel is the burlier, longer travel version of Cannodale’s flagship cross country platform. It takes the same frame and kicks the travel up from 100mm (front and rear) to a plush 120mm (front and rear) and slacking out the headtube angle even further. Larger volume 29” tires and a dropper post combine to deliver incredible speed and all-around capability. At just over 1,900 grams complete with shock, Cannondale claims the new Scalpel SE frame is lighter than cross country bike offerings from the likes of Trek, Scott, and Specialized. Our size extra-large test bike tipped the scales at 26.3 pounds with Shimano XTR Trail pedals and no bottle or spare kit mounted. COMPONENTS
Suspension: The Rock Shox SID Select is impressively lightweight but makes absolutely no compromise on stiffness, steering precision, or overall front-end control. With the large 35-millimeter stanchions and Torque Cap axle configuration, the fork is more than capable of handling very technical terrain. The rear suspension comes with a very matched feel in terms of travel and plushness, leaving the Cannondale Scalpel SE feeling balanced as it gobbles rocks and roots in the trail. While the travel is effective, it is not as bottomless or forgiving as a trailbike is, and will remind you if you miss your line choice or opt to send something to flat. The suspension can be set up to feel softer or stiffer, linear or progressive to match a rider’s personal preference. However, don’t expect this more aggressive version of a cross country bike to be more than just that. 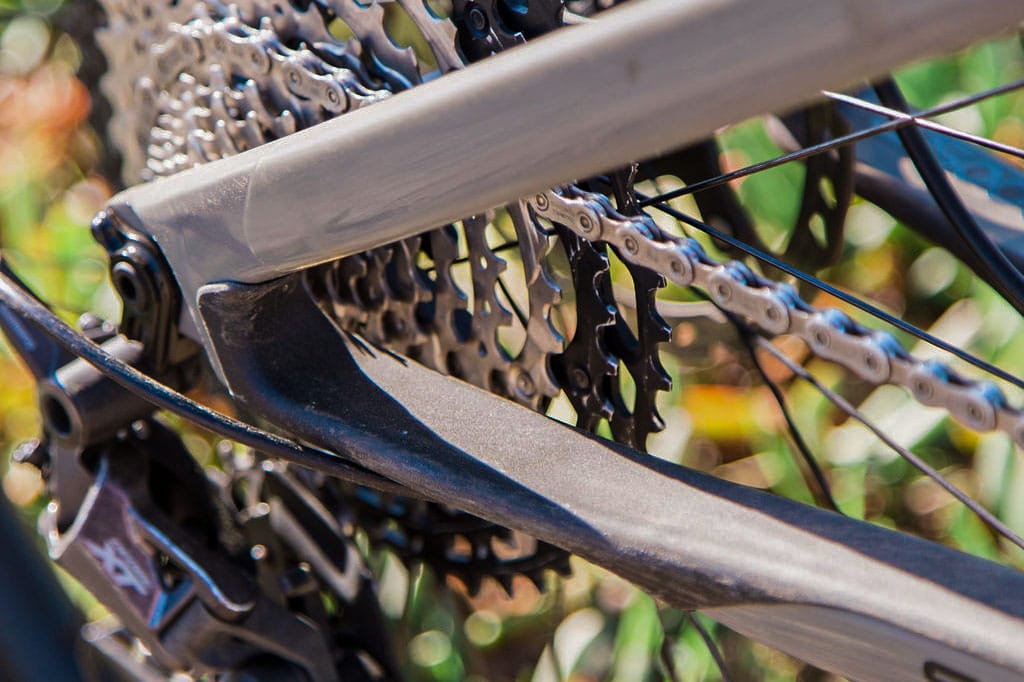 Drivetrain: 12-speed Shimano XT stuff is top notch, and performed flawlessly on the Cannondale Scalpel SE. According to our Park CC-2 tool, the chain is about 90% shot after this year, which saw about 2200 miles, and sounds about right. Shifting is still crisp, and we’d plan to replace the chain to avoid prematurely wearing the cassette teeth. The minimalist chain guide and HollowGram chairing combo are very noisy in the lower gears, and make for the only critique of the drivetrain system. While we never dropped a chain, we’d look to upgrade at least the ring to make thing run smoother.

Brakes: Once again, Shimano delivers here. The XT brakes offer plenty of stopping power and fade-free performance on even the longest descents we could take them on. We should note that these are the 2-piston caliper version, and the descents we’re talking about have faded the 4-piston versions on different bikes. However, the Scalpel is a lightweight bike with XC tires, and the 2-piston brakes provided adequate stopping power for all conditions. We used up the stock Shimano resin pads within the first six months, and then swapped to a JagWire semi-metallic compound for a slight increase in power. More aggressive riders could even opt for the fully-metallic pads with cooling fins, although it seems like overkill for the Scalpel SE. Dropper post: The DownLow post provided an entire season of use without a single mishap, slipped cable, or slow return. The action is still smooth, and the lever has a nice shape that tucks under the brake lever for a minimalist look and ergonomic feel.

Wheels: The carbon HollowGram 25s wheels are lightweight, compliant, and tubeless ready. They come with our perennial favorite DT-Swiss hubs, which means there’s not much to critique here. The rims may not be the stiffest we’ve tried, nor are they the widest. But they provide a nice matched feel for this bike that’s plenty fast. The hub engagement can be easily upgraded from the stock 18 points of engagement to 36 or 54t with kits from DT-Swiss. This would be worthwhile for any rider wanting to take full advantage of the Cannondale Scalpel SE’s pedigree as an excellent technical climber.

Tires: The Maxxis Recon Race/Ardent Race tires were among the first to catch our attention as components that could limit this bike’s potential. The tires sport low-profile, low rolling resistance knobs, and had us thinking “We’ll replace those when they puncture.” Well, almost a year later and we’re still waiting for that first failure… We’ve taken the knobs almost down to the casing without issue, aside from sliding out when our cornering form wasn’t exactly on point. The tires take the Cannondale Scalpel’s cross country tendencies and enhance them on the trail. The bike will ride quickly in any condition, uphill or down, and then remind you of their limited coefficient of friction when you need to corner. That said, we didn’t have any crashes as a direct result of a lack of traction, but plenty of close calls. Cockpit: The stock foam grips lasted a couple months on our bike, but were replaced with Ergon SE1 lock-ons for more front end control. The 780mm wide house-brand handlebar has a 9º backsweep that feels right at home. Fabric saddles shapes long been contentions with my rear end. Swapped that for an SQ Labs 612 Active saddle.

Tips and Tricks: The rubber bits that Cannondale includes to cover the shock mount are not held with anything other than friction. Ours lasted most of the season and then disappeared. Cannondale claims parts like this can be ordered through a dealer, but OE parts like this are notoriously hard to find and can be stupid expensive. Our test bike still has the naked bolts with the replacement part on order.

At roughly the 1,200 mile mark, the bottom bracket failed and began making a terrible creaking/cracking noise. When dissembled, we found the drive side bearing on the Scalpel SE had corroded and notched, requiring a replacement. Twelve-hundred miles isn’t too bad for a single bearing to fail, so we’ll chalk this one up to washing the bike too many times and not drying it properly… there was a little corrosion in there. Shame on us, unless it happens again. Flat out, the Cannondale Scalpel SE is more fun on a wider range of trails than a dedicated XC-bike should be. It reminds me of all the “slalom” or “slopestyle” bikes I built over the years, which were really nothing more than bikes with a geometry aggressive enough to throw it around and have fun on the trails. Set up properly, the Scalpel SE gives you exactly that in a package that’s lightweight and efficient enough to ride it anywhere. Even with the beefier bits, it still has reflexes like a spider monkey, and can climb like one too. What our testers fell in love with immediately is the bike’s natural ability to cover huge distances efficiently, a trait our testers exploited to access some of the most remote back country trails we could find. While the Scalpel left us wanting more travel on some of those really chunky and steep back country descents, we were so impressed to have climbed all the way back there with enough energy left in our legs to aggressively ride the trails properly we couldn’t complain about it too much. If the Cannondale Scalpel were used to run laps on those gnarly descents, it would certainly take its toll on the lightweight rims, small volume tires, and other gram saving parts, so it’s important to evaluate your riding goals and style as this is definitely still a cross country bike. That said, the Scalpel SE held its own with precision handling that puts the wheels exactly where they’re guided and handles nearly any technical trail with confidence under a skilled pilot.

The Cannondale Scalpel SE is exceptionally good at riding a huge variety of terrain well but it is not an “aggressive trailbike” that could casually do some bike park laps and still be fun on your local terrain. Instead, this is an XC bike with attitude. It is designed to be fast as an XC bike but capable enough to handle the real mountain bike terrain we crave to ride but rarely can access because it’s so damn remote. The best traits of the Scalpel SE came to light for us when we set the compass to “adventure” and simply followed wherever the trails took us. This an excellent choice for a cross country rider looking to expand their horizons without giving up all the efficiencies and weight savings that make XC race bikes so much fun to ride. 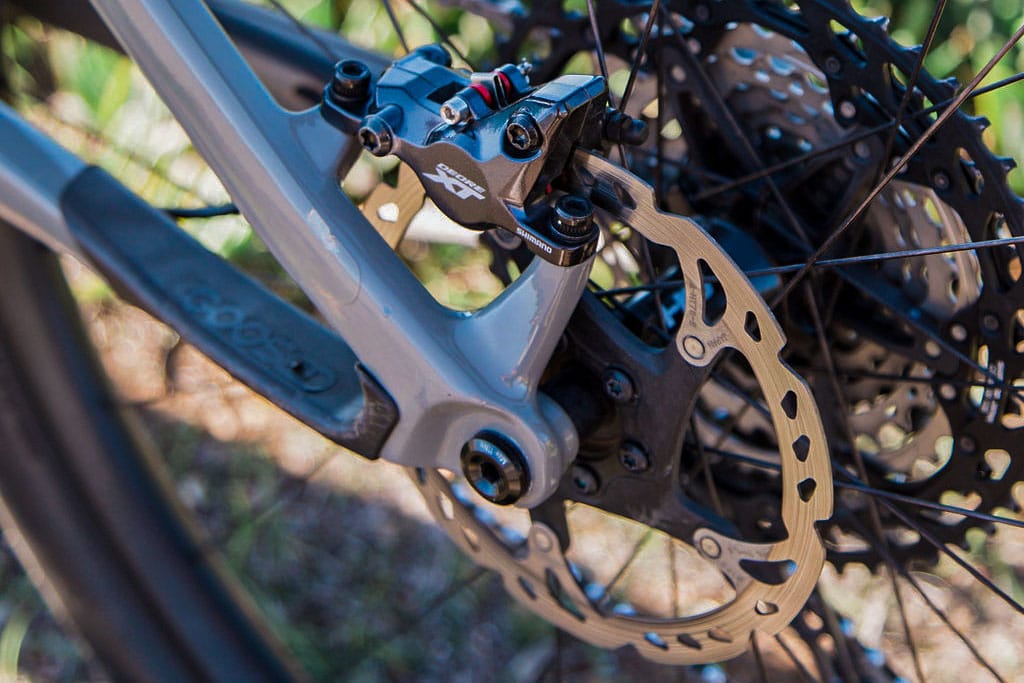