Two years after the re-release of the Santa Cruz Heckler eBike, Santa Cruz Bicycles seem to be showing their fans they have their ear to the ground when it comes to the feedback and wishes from discerning eBike riders. The first Heckler eMTB was a full 27.5 affair with a small 504Wh battery and “Nimble” geometry. For 2022, the Santa Cruz Heckler sees updated geometry and suspension tune, increased shock compatibility, a 720Wh battery, and is available in either a 29-inch wheeled frame or an MX, mixed wheel, option. Needless to say, we’re pretty excited about every single one of those updates and couldn’t wait to jump in and Dissect the new 2022 Santa Cruz Heckler.

As with all of our Dissected Features, this is not intended to be a long term review or endorsement of a product but is instead a chance for our viewers and readers to get a detailed look into some of the newest tech and products in the mountain bike space. A couple months back, Santa Cruz’s Garen Becker drove up and dropped off our Gloss Avocado Heckler, which we’ve affectionately named, the Holy Guacamole. After setting the bike up together and learning a bit about it, we geared up for a break-in ride with Garen. Despite putting some holes in the Exo+ tires, we all had a great time. Some of the key areas Santa Cruz sought to change the Heckler were immediately noticed and appreciated. Others may take a bit more time and tuning, but more on that later.

Battery Size and Range – Santa Cruz upped the battery size on the new Heckler to an interchangeable 720Wh unit. Giving this all-mountain adventurer the juice to take you farther, faster is sure to stoke riders out. The battery is easily removable via a single 4mm hex bolt for transportation or charging purposes. Suspension Updates – One of our bigger issues with the outgoing Heckler, and many older VPP designs in fact, was the harsh feeling rear suspension on square edge hits. It often left us with more hand and foot fatigue compared to other platforms. While it had benefits in certain scenarios, it was an issue for our riding style and terrain. Santa Cruz has improved the feel of the rear end by making a couple key tweaks out back.

According to Josh Kissner, head product manager for Santa Cruz Bicycles, the Super Deluxe tune has been improved quite a bit and they are also using the new Hotdog Piston option. The 150mm 2022 Heckler also uses 30x8mm shock bearing eyelets, which are also claimed to help with small bump sensitivity and feel.

Overall suspension kinematics are similar to the previous generation Heckler, however the new Low setting on the new flip chip increases progressivity in the leverage curve, which could give people a bit more cushion for the pushin’.

Those looking for even more adjustability and tuning will appreciate the larger shock tunnel. Riders can now run a coil, or large body shock on their Heckler eBike with plenty of room to spare. Geometry and Adjustability – Speaking of flip chips, the new 2022 Heckler eBike sports a lower link sealed eyelet that modifies geometry as well as the leverage curve. We really like the geometry adjustments made and think Santa Cruz have done a great job making this bike an all-around shredder without making sacrifices in the most common types of terrain ridden.

It is worth noting that there are two specific frames available, either a 29er or the MX (mixed wheel) version. The two different bikes sport different rear triangles to maintain geometry and handling proportions as best as possible. Depending on your trails or choice or intended purpose, Santa Cruz has the right option for you. We opted for the MX because we love those short chainstays and snappy rear ends.

Build Kits – There are five build kits available for North American and European markets, all featuring either C or CC level carbon fiber frames. US pricing starts at $8,199 for the Heckler C R and goes up to $13,299 for the CC carbon built X01 AXS RSV model. All models feature the Shimano EP8 drive unit and 720Wh batteries.

Before sharing our initial impressions of the bike, here are some quick questions we had for Santa Cruz’s head product manager, Josh Kissner.

WHEN THE HECKLER FIRST DROPPED, MANY EBIKE EXPERTS HAD DECLARED THAT THE BIKE WAS ALREADY BEHIND THE CURVE AND MISSING SOME KEY INGREDIENTS. WHAT WERE THOSE INGREDIENTS AND HOW DOES SOMETHING LIKE THAT HAPPEN?
Josh Kissner (JK): Haha, maybe you’ll have to give us some more info on what you think those misses were. I will say that we approached the first Heckler in a different way than we have with this latest one. With the first bike our primary goal was to make it light and agile- as much like a normal bike as possible. We knew we were going to follow it up with the Bullit, so we weren’t trying to make the Heckler a big mountain monster. Given that criteria, we felt the feedback we got on it was actually very positive.

The new Heckler is certainly more capable in rougher terrain, and of course it has a lot more battery capacity so it can be quite the backcountry explorer. We think of it as a change in tact rather than fixing deficiencies.

SO OBVIOUSLY THE “EASY” STUFF LIKE DRIVE UNIT, A LARGER, REMOVABLE BATTERY AND ADDING A 29-INCH WHEEL HAVE BEEN ADDRESSED. WHAT ELSE DID SANTA CRUZ WANT TO IMPROVE ON THE NEW HECKLER?
JK: Aside from those “Big ticket items” we definitely wanted to make some refinements as well. The geometry has been updated quite a bit, and we’ve added a Flip Chip at the lower link to allow for further adjustment. We increased the frame’s shock clearance, so nearly all shocks will fit now- where the prior bike cannot fit a coil shock or Float X2. We’ve also designed it to accommodate the 30x8mm shock bearing eyelets available from Fox and Rock Shox, which do improve the suspension a bit. We tuned up the cable routing a bit to make dropper routing easier.

Besides those things- the big change is of course wheel size. With MX and full-29″ options, we’re trying to make a Heckler for everyone. Twentynine for ultimate traction and rolling speed, MX for agility and confidence in the steepest terrain. WHILE WE REALLY LIKED THE PLAYFUL DEMEANOR AND FUN OF THE PREVIOUS HECKLER, WE FELT THE SUSPENSION WAS A BIT HARSH ON SQUARE-EDGE HITS. HOW HAS THE NEW BIKE ADDRESSED THAT?
JK: The Rock Shox Super Deluxe tune we use has improved a lot since the initial year of the Heckler. We’ve also been using their new Hotdog Piston option for over a year now, which definitely improves the feel on square-edge hits. The new bike carries this forward with the addition of the bearing rear eyelet- which also improves the small-bump feel. Generally, the suspension kinematics are very similar to the prior bike, with the addition of the Low setting on the flip chip which also increases the progression of the leverage curve.

HOW ARE EBIKE SALES DOING FOR SANTA CRUZ COMPARED TO OTHER NON-E MODELS?
JK: It’s an interesting time in the industry because we sell everything we can make. And we make everything we can get our hands on- but bike parts are difficult to get.

WHERE DO YOU SEE EMTBS IN FIVE YEARS?
JK: I’d be lying if I said we knew that…. But if we did, we’d keep it to ourselves ;-)

ANY THOUGHTS ON THE “EBIKE LIGHT” MARKET? LOWER POWERED, LIGHTER WEIGHT EMTBS.
JK: I think this is definitely a category that has legs and is certainly going to expand in the next couple of years. My personal thought is that these appeal to riders who only have an eBike, and they’re looking for a more natural feel from the motor and handling. Riders with eBikes as a second (or 4th?!?!) bike are probably keener on the full-power hotrod and appreciate that it’s a different experience altogether. These are just theories however and we’re just happy to be involved in the bike business and stoking riders out.

Our first ride out on the 2022 Heckler eBike with Garen was on some of our favorite downhill trails in town. The trails are very steep, feature incredibly sharp rocks, awkward drops into tight corners, require hard braking and then throw in some high-speed trails with big jumps. The variety of trails and capability of this new Heckler had our crew smiling all day. Except for the times we had to stop and fix flats on the Exo+ tires. We’re not sure if that’s a supply chain issue or a strategy to keep this bike’s weight under 50lbs on the showroom floor, but we’re planning on upgrading to some heavier duty tires.

Our time aboard the bike has been plentiful but not nearly enough for our standards of what is required in a long-term review, so stay tuned for that. What we did learn so far however, is that Santa Cruz’s new Heckler is a lot more capable all around. The range is greatly increased while rollover speed and confidence are better thanks to the larger wheel and updated geometry. What carries over and may even be improved as well is the bike’s ability to jump, dance, hop and snap with an almost effortless feel. At least on the MX-wheeled version. The Heckler gets off the ground with ease, changes direction easily and is incredibly fun all around. Now, we couldn’t get out of this without addressing our biggest issue with that last Heckler, rear suspension harshness. Santa Cruz has improved square-edge performance without a doubt. The updated Heckler does feel better than the last version, however, we’ve still got some more shock tuning to play with before we release our official verdict in the long-term review. If you can’t wait that long, we don’t blame you, it’s safe for us to say a lot of riders are going to love the new 2022 Santa Cruz Heckler eBike. 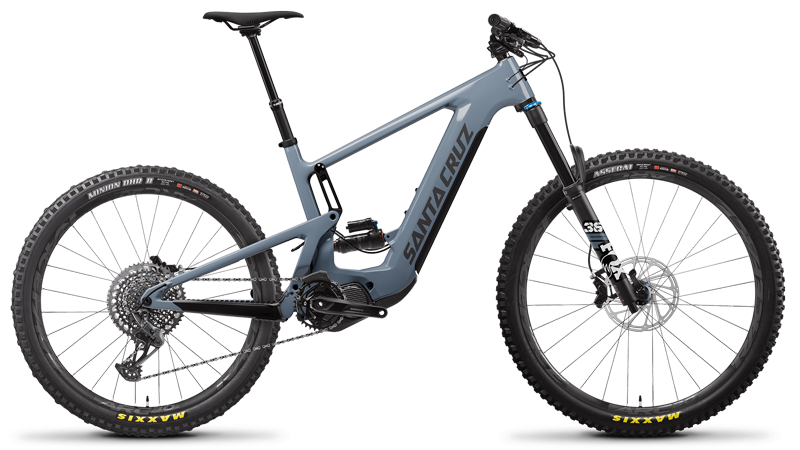