Skip to content
Rob’s Rants:
Get A BMX Bike

GET A BMX BIKE

You don’t need me to tell you mountain biking is great, it’s likely why you’re on this website after all. But alongside the long pedally days in the middle of nowhere; the bike park lapping; and the short sessions on a few jumps and turns; there’s been another kind of two-wheeled riding that has been prevalent in my life. Unfortunately I’ve yet to fully appreciate the feeling of a throttle in my hand, and I’ve never quite succumbed to the skinny-tired darkside. Nay, what I’ve enjoyed over the years is time spent on another rigid bike with funny sized wheels –  bicycle motocross (BMX).

Rob’s Note: I’m going to focus on BMX bikes for this article, but most of the same will apply to a dirt jump bike also. However, having tried and owned many of both styles over the years, I can safely say that BMX is my preference. So, although it’s likely to be less attractive to many die-hard mountain bikers, it’s what I’m going to make my case for here. You’d be forgiven for thinking BMX is a sport for children, or for the outlaws who haven’t quite reached the levels of distinction that us mountain bikers possess… however, I’d beg to differ. BMX has given me one of my most cherished friendship groups; let me ride some of the world’s finest concrete, and most importantly helped me to build skills that transfer over to the mountain bike world and ultimately make my time on the dirt more enjoyable. Don’t get me wrong, there are some utter shitheads who frequent skate parks and do their best to give that world a bad rep, but the same can be said for anywhere. Not convinced it’s for you? Let me try to change that.

For a start, getting into BMX is cheap, at least relative to the fully suspended mountain bikes we love so much. Since they’re so damn simple and tough, buying used is much less of a gamble as it takes very little expenditure to freshen up a rough headset or worn chain. With that in mind, you can typically pick up a decent used BMX for just a few hundred dollars [Ed: please don’t just buy any old BMX though, read on to get some tips on the best style to purchase]. Once you’ve got the kit, which amounts to the BMX, a set of flat pedal or skate style shoes, and a helmet (your trail lid will be just fine, don’t let fashion tell you otherwise), you’re good to go. Maintenance costs are minimal (or nonexistent for many BMX riders), as the bikes tend to work just fine for long after their first creak or rattle develops. Aside from any travel you may desire to undertake to ride a particular BMX spot, or the comparatively cheap $10-20 entry fee for a private skate park, you’re done spending and can just enjoy the ride.

I can’t guarantee that everyone will actually enjoy the ride, at least not immediately. There’s a learning curve that can be quite frustrating to begin with, as suddenly the terrain is unfamiliar and the bike unforgiving. But give it some time, learn how the bike handles and how the ramps of a skate park or rollers of a pump track feel, and it’ll come good eventually, I promise. There’s few better feelings than the speed boost that a perfectly nosed-in landing on a jump box or well timed pump on a roller gives you on a BMX. With no suspension or soft and sticky rubber to rob you of your speed reward, you accelerate like you’ve hit a boost pad on Mario Kart. The first time you pull off a new move on a BMX often follows many attempts, either battling your head to overcome a mental block or figuring out the physics behind the move. When it “clicks” and you nail it, the sense of reward and satisfaction – and oftentimes relief – is truly awesome. The lack of suspension on a BMX (or a very small amount on a DJ bike) keeps you honest. Instead of having a huge window on the landing where you can roll away comfortably thanks to suspension and tires that will soak up the impact, you suddenly feel a mild case or flat landing through your body and all the way into your soul. You’re then forced to reign in your landing zones from being precise to within a couple of feet of the “sweet spot”, down to a couple of inches. The improvements to your technique are compounded if you ride brakeless (which I’d highly suggest against to begin with) – you’re forced to hit the take off of a jump at whatever speed you’re at, and then force the bike to land on the landing by either squashing or boosting. Once you’ve honed in this precision, once you get back on the mountain bike you’ll undoubtedly ride smoother and more efficiently, and have learned how to boost higher and further than ever before.

Aside from the bike necessitating a more precise approach, the secondary benefit in terms of skills training is that skate parks and pump tracks are consistent environments. This means you can return over and over without a wide variation in how they feel, making it easier to get familiar through repetition. You don’t have to adjust to a blown out dusty (or more typically for me, ultra-slick and muddy) turn or braking zone, so the only thing that’ll change is you. Skate parks can be violent in the wet, and BMX components are poorly weather sealed, so it’s definitely a dry activity (hence why indoor skate parks are so good), ensuring the grip is always the same.

When it is dry though, you don’t need to be at an incredible skate park, dirt jump or street spot to enjoy yourself. In the same vein as their simple construction, you can have a lot of fun on the most simple of features – a small curb, sidewalk ramp, sloping tree… you name it, part of the beauty of BMX is being able to interpret terrain and get creative. Hell, I’ve even had fun times on a BMX just using two painted lines on flat tarmac. When you practice in these simple spots, the buzz of a good setup is all the better, where you can apply your newly learnt skills and control to more favorable terrain and feel like a champion. Because enjoyment can be had just about anywhere, it’s so easy to chuck your BMX into the back of your car and pop out for a quick lunch break play or break up a road trip with a quick session, making it a lot more convenient than the prep and cleanup necessitated by your typical mountain bike ride. Then there’s the social aspect of it. If you can convince your buddies to get into it with you, then you’ll enjoy the joint sense of progression and encouragement that it brings. And if your buddies suck, experience tells me that a very high proportion of riders in the BMX world are incredibly accommodating to new riders and straight up good people. So good in fact, that I was recently best man at a BMX friend’s wedding – the BMX Stag Do/Bachelor Party was awesome. It’s seldom that I’ll meet a fellow BMXer and not swap Instagram accounts to stay somewhat in touch, which says a lot. I can’t say the same for many of the scooter users who’ve inundated skate parks across the globe, but they’re not usually bad enough to cause anything more than mild frustration.

I’ve been mainly skate park focused here as it’s where I’ve spent most of my BMX “saddle” time over the years. However it would be a sin to ignore the absolutely majestic world of BMX trails. Contrary to the shambles of your typical backwoods mountain bike trail, BMX trails are often a work of art in dirt form. They kinda have to be, since the lack of compliance of the bikes intended to ride them necessitates a smooth surface, and to retain their structure and your speed it needs to be rock hard. BMX trails has a unique culture, where there is the utmost respect for the Trail Boss (chief digger), and you are typically expected to earn your riding by helping out with the maintenance and upkeep of the jump spot. While the spade time can be frustrating to those looking to get a quick fix of airtime (I’m not afraid to admit that this is often me), it’s a necessary evil, and once you accept that, it turns into a fulfilling activity for both your soul and OCD. The work you put into digging then makes the reward of riding all the sweeter, and the unparalleled flow of a good trails spot is about as candied as riding gets for me.

Overall, BMX is simply so much fun. If you’re an experienced mountain biker, it’ll give you a new sense of progression and achievement that you may currently struggle to find thanks to your experience. If not, it’ll likely accelerate your mountain bike progression up to expert levels. Worst case scenario, if you’ve purchased a used bike and haven’t ruined it, the chances are you’ll be able to sell it for essentially what you paid for it, so the risk of giving it a go is minimal. But the potential rewards are great: a new found passion; improved skills on two wheels all round, and new friendships. 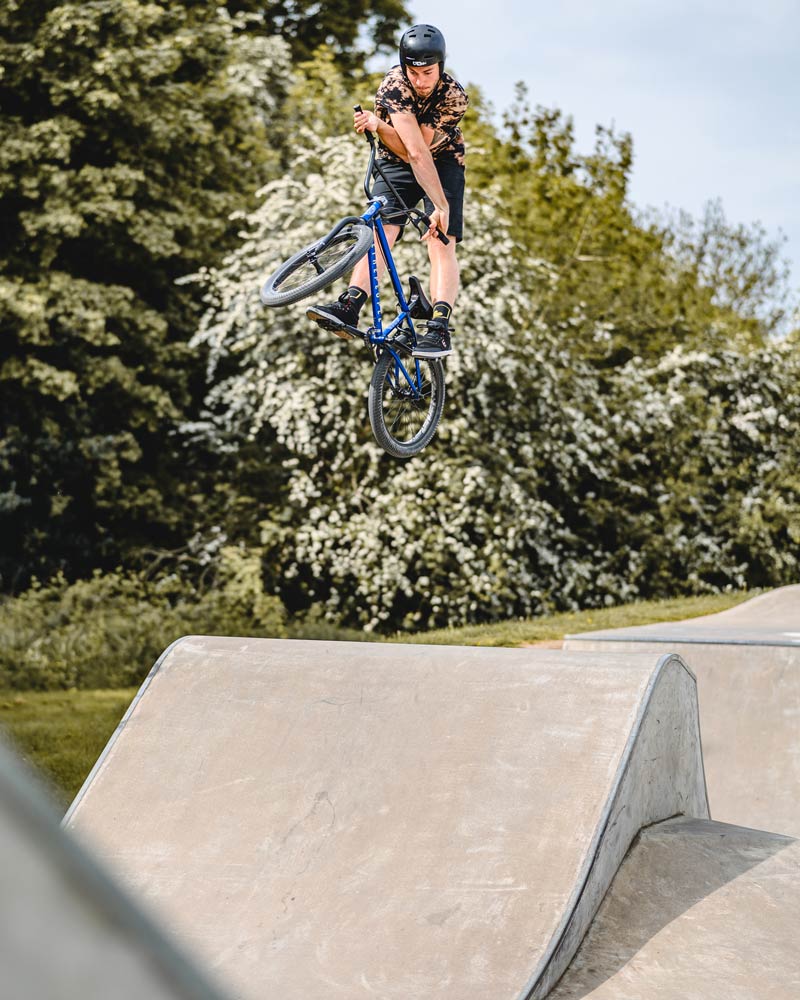 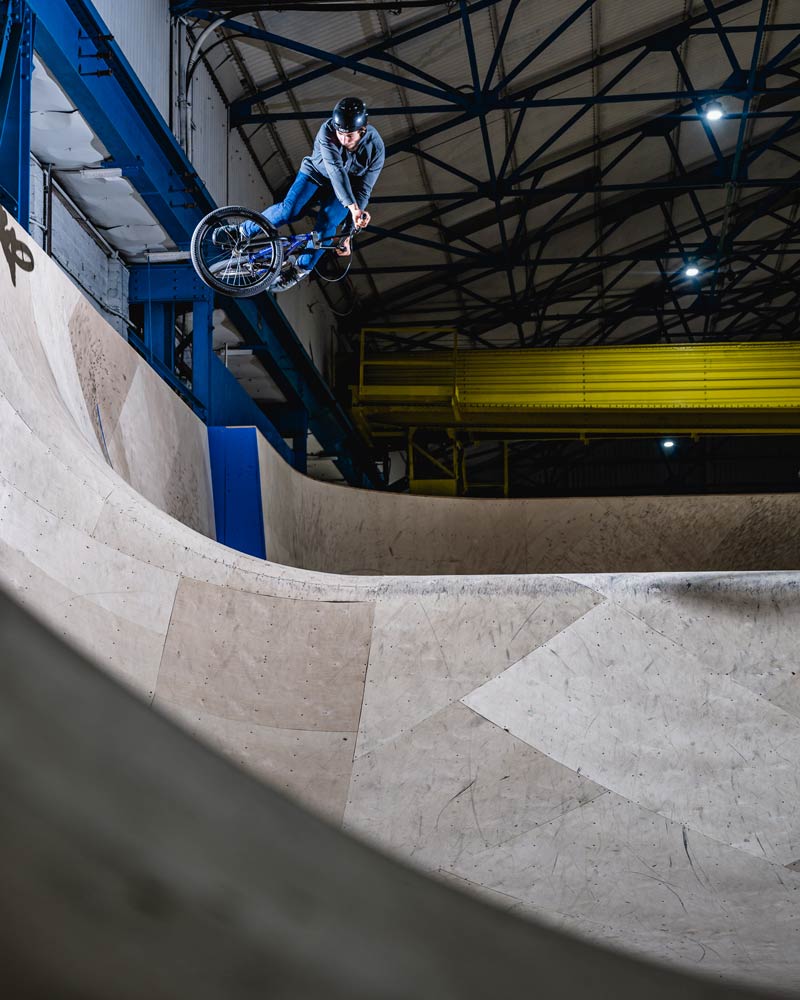 If this has convinced you to give BMX a go, and you’re looking to purchase a cheap used bike, then don’t make the classic mistake and get on an ultra short and twitchy BMX that feels so alien that you can’t enjoy it. Contrary to what seems to be the assumption by many, not all BMX bikes are created equal. It’ll depend on your height and proportions of course, but for average height adults the chances are you’ll need at least a 21.25” top tube on your BMX to give enough cockpit room and stability to be comfortable. You should ideally be looking towards the more trails oriented geometry numbers too (Head angle less than 75, rear end over 13.4”, BB height under 11.5”), and of course make sure there’s a rear brake on there to make things safer and more confidence inspiring. Even better, find a 22” wheeled model, like the We The People Audio we reviewed here,  to further boost the stability and familiarity with very few drawbacks. Front brakes are reasonably rare in BMX and aren’t essential, so don’t be put off if you’re looking at an otherwise suitable bike. If you need any assistance in selecting a BMX for your proportions and intended riding, please leave a comment and I’d be more than happy to help.