Sidi was founded in 1960 by craftsman and avid rider Dino Signori. Dino’s first pairs of performance footwear were manufactured by hand in Italy, adhering to traditional methods, and finished with a stamp of his initials “SiDI.” Since then, Sidi cycling shoes has become synonymous with quality construction. The new Defender 20 is an update on an old favorite, designed to cater to the needs of a wide swath of riders from trail to enduro. It’s manufactured in Sidi’s new Romanian production facility, a departure from their hand-made in Italy heritage. But as with many manufactured goods, saving costs in manufacturing mean Sidi can keep retail prices moderately low on some models, while retaining their hand-made in Italy production for their top-end offerings. We put these shoes through the wringer on a wide variety of terrain and conditions to see if they could defend themselves from some hard Loam Wolf test miles. 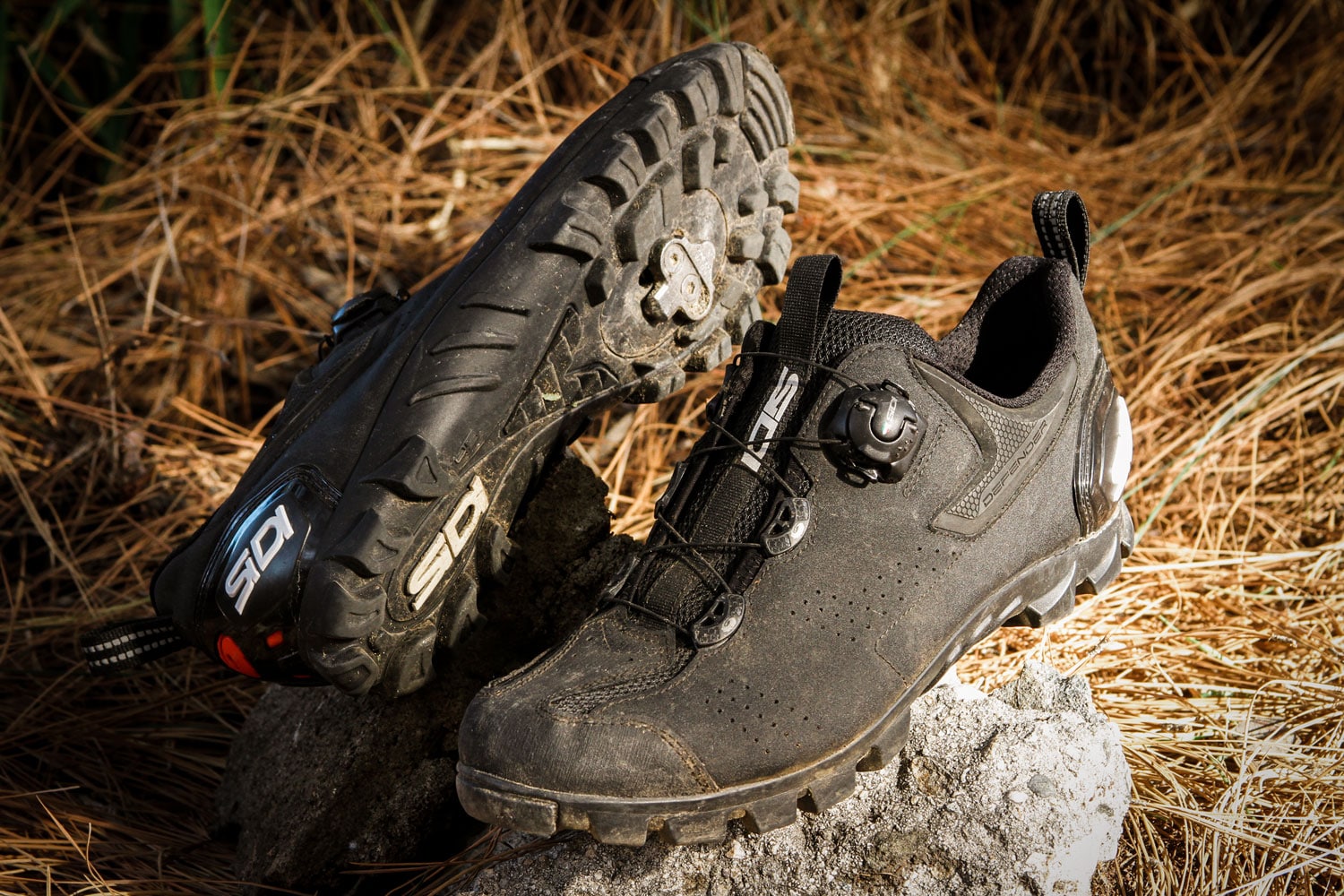 THE LAB
The Defender 20 is a mountain-specific shoe that is designed with both on the bike performance and versatility in mind. The upper is built with a synthetic material called Politex that uses several overlapping layers of PVC and fabric that are compressed together to offer strong resistance to laceration, stretching and fading. The Defender 20 uses Sidi’s Techno 3 fit system that dials in fit along the entire length of the shoe, adapting the upper to the shape of the foot for a customized fit. The closures are held together by an all new proprietary Sidi Wire material that is non-binding for on-the-fly adjustments. Like most SIDI small parts, the Tecno 3 system is serviceable and replaceable. The sole is Sidi’s Outdoor Rubber, which provides grip on variable trails, and mates to a molded and reinforced heel cup to keep your heel in place. Our size 45 test shoes tipped the scales at 996 grams with Shimano SPD cleats mounted. The Defender 20 sells for $225 and can be purchased at any Sidi dealer. THE DIRT
The Defender 20 threads the needle between cross country and downhill for intended use and provides features that riders in both camps can appreciate. They are stiff enough to feel efficient and responsive yet provide tons of off the bike traction for hike a bike sections and overall walkability. The upper is form fitting and molds to the foot nicely, a feature that’s even more noticeable with the easy-to-use, single-buckle wire closure. Just a quick spin of this “buckle” dial cinches the shoes closed with no noticeable binding in the wire. The tongue stays in place reasonably well, although after several rides the material develops bunches slightly on the sides where the wires bite in. However, thanks to the molded heel cup, you don’t need to run the closure system overly tight to keep the heel in place and can easily keep the tongue in place without deforming it. The insole is thin and firm, because Sidi relies on the excellent contours inside the shoe to cradle your foot, not simply put a cushy sponge under it for comfort. The outsole is aggressive enough to provide off the bike traction as well as any other shoe we’ve tried on rough terrain, even compared to flat pedal shoes with sticky rubber. The Defender has an airy ventilation system that makes it a solid choice for summer heat but makes it less than water resistant.

Our pair of test shoes lasted a few weeks and well over a hundred miles of trail before they began to show the slightest wear. Unfortunately for us, at roughly the 150-mile mark, the toe of the sole began to separate from the upper on one shoe. When contacted about the issue, Sidi mentioned that it would not be covered under a warranty and was likely the result us catching a toe under a rock. Fair enough. A week later we took them for a ride that nearly turned into a search and rescue mission and involved extensive amounts of bushwhacking over and under fallen trees. While the Defender stepped up and delivered tons of traction on that excursion, we found that at some point during that excursion we punched a hole in the side of the upper. That one we can probably chalk up to our own negligence and lack of ability to read a map, but it’s always a bummer to find damage on your gear, even after a hard ride. At $225, the Defender certainly isn’t a bargain shoe, unless you consider that we’ve seen other Sidis in our collection last the better part of a decade. After months of testing we can say that the Defender held up reasonably well to our flogging. But they might not be able to go a full decade before they need to be replaced. That said, the performance Defender 20s left us feeling we didn’t compromise a thing in efficiency on the climbs, nor control on the descents. They use a smart blend of features and solid construction to make a shoe that’s as comfortable cruising easy trail miles as it is shredding an aggressive big-mountain descent. It gives plenty of confidence both on and off the bike and is welcome in our test fleet for as long as they hold up.

Durability is as questionable as our map reading skills