The new Niner WFO e9 was the first eMTB from the Colorado brand and was built to be a burly self-shuttling dream machine. Sporting mixed wheels, 180mm of bump-eating travel and a powerful Gen 4 Bosch drive unit, we were excited to see if the performance would make up for the polarizing looks of the WFO e9. Over the years we’ve ridden several of Niner’s bikes and we’re happy to see they’ve made some big improvements over the years in their pedal-bike range from aesthetics to geometry and performance. Rigs like the new Niner Rip 9 RDO have won us over with its capability and trail manners and we were excited to see if the new breath of life would carry over into Niner’s ebike line. Niner Bikes is a small brand committed to both the mountain bike community and to preserving access to trails for riders. We were able to do a Dissected feature video on their long travel, mullet eMTB a few months ago and have been riding it on our local test tracks ever since. After a summer and fall of riding, here are our thoughts on the WFO e9. THE LAB
Niner’s WFO e9 borrows much of its heritage from the analog WFO, Niner’s aggressive enduro machine. The WFO e9 is built from 6061 aluminum, around a Bosch Gen 4 Performance CX drive system and 625Wh battery. On the bars is the Bosch Purion display unit, which is large and eats up space but offers techies much of the valuable information they may be looking for on the trail. It puts out 85nm of torque and accelerates to that max torque with a predictable curve to keep the tires from spinning out. Heat management has been prioritized and it shows with no appreciable heat limitations even under heavy load on hot days. Niner has finished off the WFO e9 with a full coverage downtube protector that also functions as the battery cover, bottom bracket armor and protects the internal cable routing.

Geometry on the Niner WFO e9 is on par with other bikes without being overly aggressive, making it capable without being a chore to handle. Our size large test bike in Low mode has a chainstay length of 430mm, a wheelbase that’s 1,271mm, a head tube angle of 63.5 degrees, a seat tube angle of 76 degrees, and a reach of 470mm.

High mode brings the head tube angle in 0.5 degrees to 64 and the bottom bracket height up 6mm. The larger diameter front wheel helps the slack front end track dead-on while the smaller rear wheels snaps to attention with little effort. We think Niner did a good job balancing stability and capability on DH trails without making it too slack and long for the climbs getting you to your favorite downhills. Niner incorporated forged frame end links and dropouts and utilized Enduro Max bearings for longevity, which are nice features. Niner wanted to prioritize a build that was both durable and cost efficient with their 3-Star SRAM SX offering. Suspension is handled by a Rock Shox Yari RC 180mm fork and a Super Deluxe Coil select R trunnion mount rear shock. SRAM Guide RE brakes are spec’d for braking duties but are a bit under-gunned and problematic for such a heavy and capable 180mm ebike. The drivetrain is a SRAM SX eagle 12 speed setup, which is coupled with 165mm Praxis cranks. We’re huge fans of 165mm cranks and thank Niner for the good call there.

The cockpit is all RaceFace Aeffect R with a 35mm stem and 780mm bars. Dropper duties are handled by a KS Lev SI, which is 125mm on the medium and 150mm on the large, a bit of a bummer as we think a 180mm travel bike should have a 170mm dropper for navigating the steeps. Stan’s Flow rims are wrapped in Maxxis rubber with a Minion 29×2.5 front and DHF 27.5×2.8 rear. A solid combo that you can’t go wrong with and gave us no issues throughout the test.

The frame uses a tried and true Horst-Link suspension design that has a high degree of anti-squat and low amounts of braking force feedback. The suspension curve has been balanced with lower progressivity on the top and a larger ramp at the bottom. Due to the design of the four-bar linkage, a trunnion mount shock was utilized with bearings in the pivot that allow for free range of movement and durability and a supple feel on the trail.

THE DIRT
After riding several different motor systems over the past year, we still think the Bosch Gen 4 CX is at or near the top. It delivers manageable torque in all settings while putting down the most power of any motor. When climbing next to other eMTBs of similar torque range, the Niner WFO e9 is able to outpace even the most fit riders. On the descents, the motor is predictable and easy to manage. Battery life is outstanding. We were able to put several 20+ mile days in Turbo mode with 3,500ft of climbing on the WFO e9, just getting back to the trailhead on the last drops of juice.

The controls and display on the Bosch Purion are clear and large with four different levels of assistance but can be polarizing. It takes up a lot of room and is an Achilles heel of the Bosch system should the bike crash and damage the screen. eMTB mode was our favorite power setting since it automatically gives the rider full boost on steep climbs based on drivetrain strain but also dials back the power on flats and downhills to conserve battery. The only thing we think could be better is the placement of the walk mode button, since it forces the rider to hold their thumb in an unnatural position that causes cramping. For such a long and slack bike, the Niner WFO e9 climbs well. It’s more of a high-powered tank than a trail scalpel. It actively uses that long rear travel to suck up all obstacles and apply power in every situation. We doubt it will be winning any bunny hopping contests, but it may be the steep hill climb champ if you can keep your legs spinning and traction on the rear tire. As with any long and low bike sporting gratuitous travel, you will compromise tight, technical climbing prowess in exchange for downhill performance. That said, the Niner e9 does its best to make up for that with a huge rear tire and traction for days.

Descending is really what the Niner WFO e9 is all about. The mullet-specific geometry comes alive on steep, fast single tracks. The rear end is quick to snap a turn while the front has the rollover speed to take you down whatever line you choose. Without a doubt though, the WFO e9 lives for the chunk. It takes the biggest hits with ease and mutes the terrain below. The downside to that magic carpet feel is that it’s is a bear to get the bike airborne. No doubt the 55+ pound weight equally contributes to this 180mm bike’s planted feel. Keeping that rubber on the dirt has advantages though, as we were able to plow obstacles with confidence and carve turns with huge amounts of grip that seemed never ending. A surprisingly fun treat however is that the rear end breaks free in the most satisfying way, and snaps Skandi turns with the best of them. Don’t expect to air those little trail doubles and sniper landings, but do plan for bar dragging turns and a plush plow rig.

When we talked with Niner for the filming of our Dissected series, a goal was to keep the cost of the bike under $6,500. To do this they made decisions that balanced performance with value. Although a couple decisions were also made for them due to COVID-19 product availability issues. For example, we heard there may be a Rock Shox Zeb-equipped model coming out in the future, which is great because the Rock Shox Yari is a bit of a let down when it comes to riding this bike park. If you are a heavier rider or plan on putting the hurt on the trails, this fork will be a weak point and require an upgrade to a Fox 38 or other 38mm fork. Moving onto the rest of the bike, the build is a mid-level spec that leaves the value discussion open for message boards wanting to talk about consumer direct brands and components, but we felt it was pretty reasonable compared to other bikes on the market.

Niner’s WFO e9 is a solid contender for an aggressive self-shuttle bruiser in the long travel category. We couldn’t do this review without talking about that unfortunate hump in the top tube and how much better the bike would look without it, which is a bummer because we  like the colors, paint and graphics otherwise. Not to mention it’s a liability when you crash as it’ll surely get scratched to hell by the levers when the bars spin ‘round, as you’ll see in our future RIP e9 review which has some battle scars.

Beyond the top tube hump, a couple spec choices and the weight, the Niner WFO e9 has a lot of great characteristics that’ll make it worth a look for riders in the enduro eMTB market. If you are looking for a replacement for your beat old shuttle truck that can handle nearly anything you ride, take a test ride on the WFO e9. The Bosch Gen 4 system helps make this 180mm sled capable of more than just shredding downhill laps. It’s a comfortable bike, with a supple and sensitive suspension platform that allow you to push hard and charge the straight lines just as easily as you could explore the backcountry or cruise fire roads in the saddle. It is maneuverable once you get the technique and is a lot of fun on the ground, it’ll just make you stronger. If you live in an area with lots of big rocks, we’re thinking SoCal, Arizona, New Mexico and naturally, Colorado, you’ll like the traction and smoothness aboard this machine. If you live for flicks, hops and pops, well, chances are you’re not looking at a 180mm eMTB anyways.

We’ve recently teamed up with competitivecyclist.com to offer our readers an exclusive discount and access to some of the best pricing online. Use LOAMWOLF15 for 15% off applicable items and regularly find some great deals on Santa Cruz bikes and more. Through this partnership we may also receive a small commission from purchases at no cost to you. Thanks for your support, TLW. 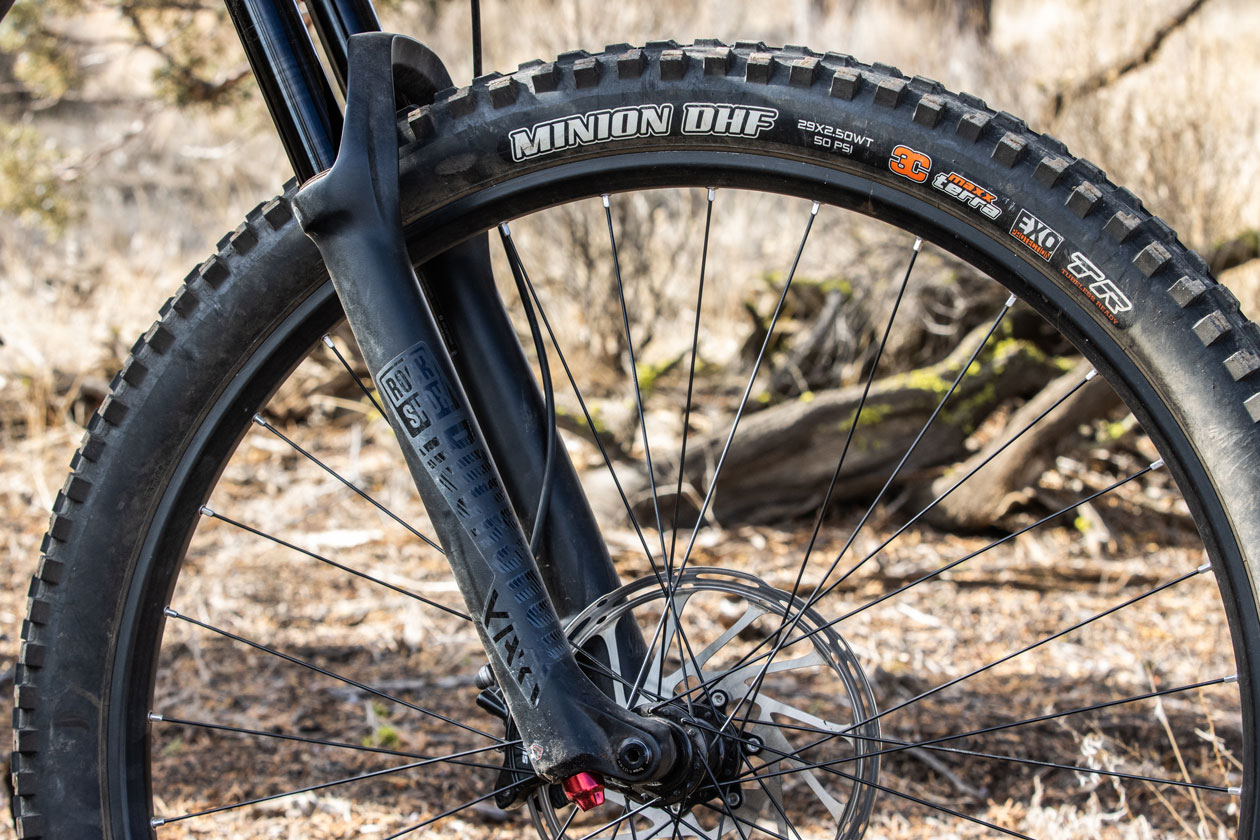