If you ride dirt bikes, quads, or anything of the sort, one of the most necessary pieces of equipment are tie-downs. There are a plethora of tie-down options on the market, some meant for moto with integrated soft ties and other more basic tie-downs that you can get from say Harbor Freight. Factory Effex has been apart of the motocross world for more than 20 years, having started with custom graphics then moving to apparel, hard parts, and anything else one could think of. Most recently, FX introduced officially licensed 1.5” tie-downs sporting the logo and colors of most moto manufactures.

*Editor’s Note: I worked for Factory Effex for a couple years while we got TLW off the ground as one of their graphic artists, I was even around for the development of the tie-downs but that doesn’t mean objectiveness is out the window. 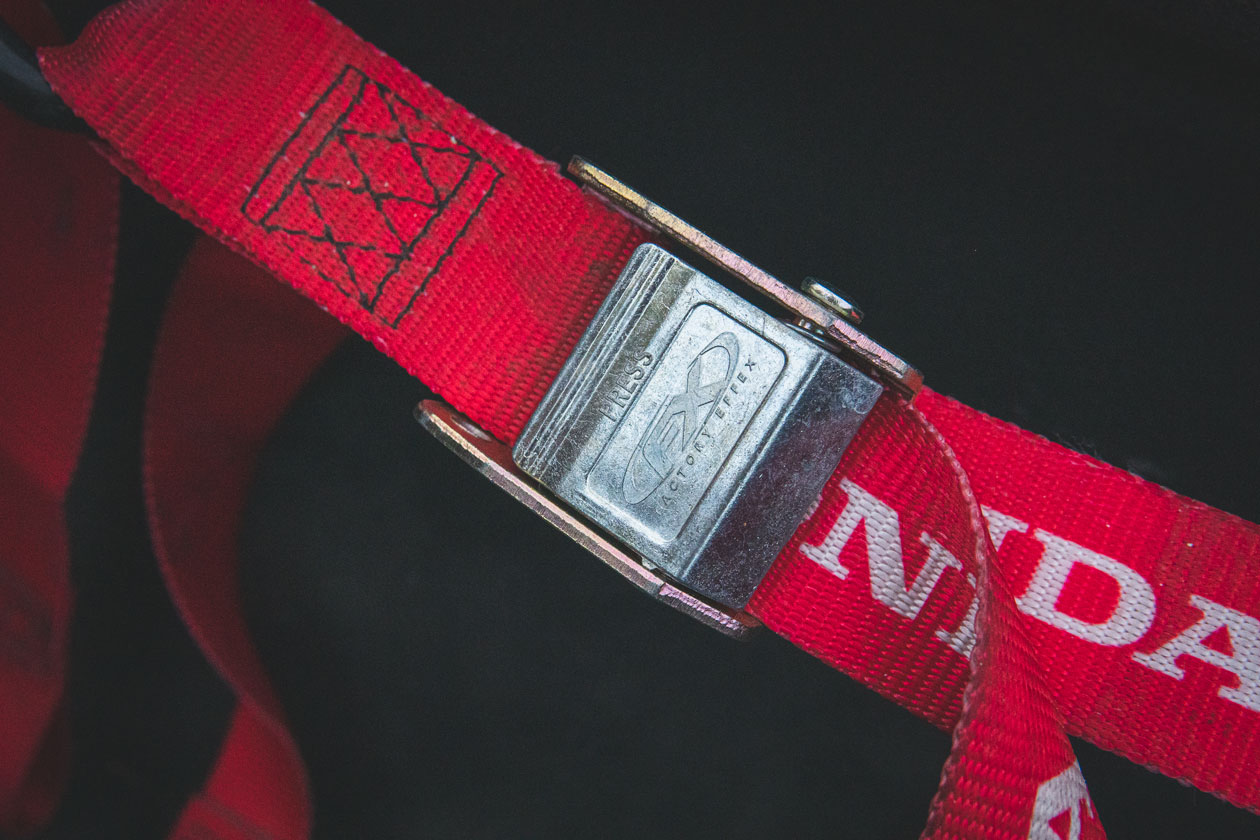 THE LAB
With licensed logos sublimated into 1.5” over-sized air-craft grade nylon straps, these Factory Effex are perfect for the brand loyalists out there. The straps are sold in pairs and feature built-in soft ties at the top of the strap. The soft tie loops onto a soft coated hook that is meant to help protect the bike from unwanted scratches. Moving down, we have a traditional heavy-duty nonslip cam lock buckle, and finish with a heavy-duty spring-loaded carabiner hook that clips to the mounting point on the vehicle. When it comes to the strength of the tie-downs, they have been rated at 1,200lbs (544kg) for straight tension strength. One neat feature Factory Effex has incorporated into the straps, is a large name label where you can write whatever you want, in case you leave your straps in a friend’s rig, so they know where to return them…maybe. Currently, Factory Effex offers officially licensed tie-downs for Honda, Yamaha and Suzuki and there are two color ways for each brand. Unfortunately, and not for a lack of trying, there are no KTM and Husqvarna variants from Factory Effex, as those companies like to keep aftermarket goodies in house. For those less inclined to represent the brand of their chosen steed, there are even a couple Factory Effex branded straps. THE DIRT
For the longest time, I was using either a set of commandeered KTM Powersports soft-ties or cheap tie-downs from Harbor Freight. Both did the job but after I picked up my new moto, I figured it was time to get a new set, preferably ones that were not branded with another moto company’s logo. That is when I reached out to Factory Effex to get a proper set of red, officially licensed Honda tie-downs. Normally I would have opted for the black set, with concerns that colored options would fade in the sun quicker but figured for photos sake the red would look better. After months of use and being left to bake under the sun in the bed of my truck, I can happily report that the straps have still maintained their like new red sheen though they may lose that right around the year mark, only time will tell.

Looks are only a small part of what matters though, what really matters is do they do their job and how well do they do it? After all there is nothing more important than keeping your moto safely secured in transport. I had one requirement that needed to be met for tie-downs, they needed to have soft-ties built in and the Factory Effex 1.5” Tie-Downs have just that. Soft-ties offer a more secure way to strap down your moto with an added benefit of not scratching your bike wherever you use the tie-downs. For me, I loop the straps around the fork tubes just about the lower triple clamp, I don’t have to worry about cables getting in the way in this location and there is a solid amount of leverage going to the upper mounting locations in the bed of my truck. The straps retain their initial tension on every outing so far, even the days when I am “Doing it for Dale” on the way to the trailhead. There also no worry of the straps coming out of the mounting locations under major flex thanks to the Carabiner lower clips, one of my favorite features next to the soft-ties. The only issue I have run into with these straps is when I am hauling a second bike. The carabiner clips are about 3/8 of an thick and the upper mounting locations in the bed of Clifford aren’t much bigger than that. That means that the second bike either needs to use a small, hooked tie-down for the center location or have to be mounted on the other side of the bed in its own mount. Tie-downs either do their job well, or they do not do it all. Factory Effex’s 1.5 Tie-Downs do their job well and look good doing it. The integrated soft-tie is a huge reason I wanted the straps and so far there are zero scratches on my forks or lower triple clamps because of them. The use of a carabiner over standard hook is also a nice addition: no more dealing with the bed hook coming off when trying to tighten the straps down. The sublimated coloring on the straps have retained their looks after months of being cooked in the bed of my truck. They are a few dollars more than some of the options from competitors in the industry, but that is a side effect of being officially licensed tie-downs. The only “negative” I have on the straps is that the size of the carabiner is rather large and makes it near impossible to fit a second strap into my tie-down mounts in my bed…at least when other heavy-duty straps are used, smaller hooked tie-downs will just barely fit.