Nukeproof have had a carbon fiber handlebar offering in their lineup for a few years now. Since the Horizon V1 Carbon bar launched, the requirements and preferences of riders have shifted slightly, with ultimate stiffness and minimal weight no longer the magic combination for a mountain bike cockpit. Looking to cater to these modern demands, Nukeproof set about redesigning their Carbon bar to offer improved comfort and control, releasing the Horizon V2 Carbon riser bar that we were sent to test.

THE LAB
The Nukeproof Horizon V2 Carbon Riser Bar is a visual departure from the V1 model, losing its aggressive and polarizing angularity and instead seeing a much more natural flowing design at the bends that is likely to look better on the majority of bikes. Nukeproof opted to employ a 9-degree backsweep and 5-degree upsweep on the bars to offer what they believe to offer the most ergonomic wrist position but offset these sweeps in order to reduce the amount of reach lost due to the backsweep. 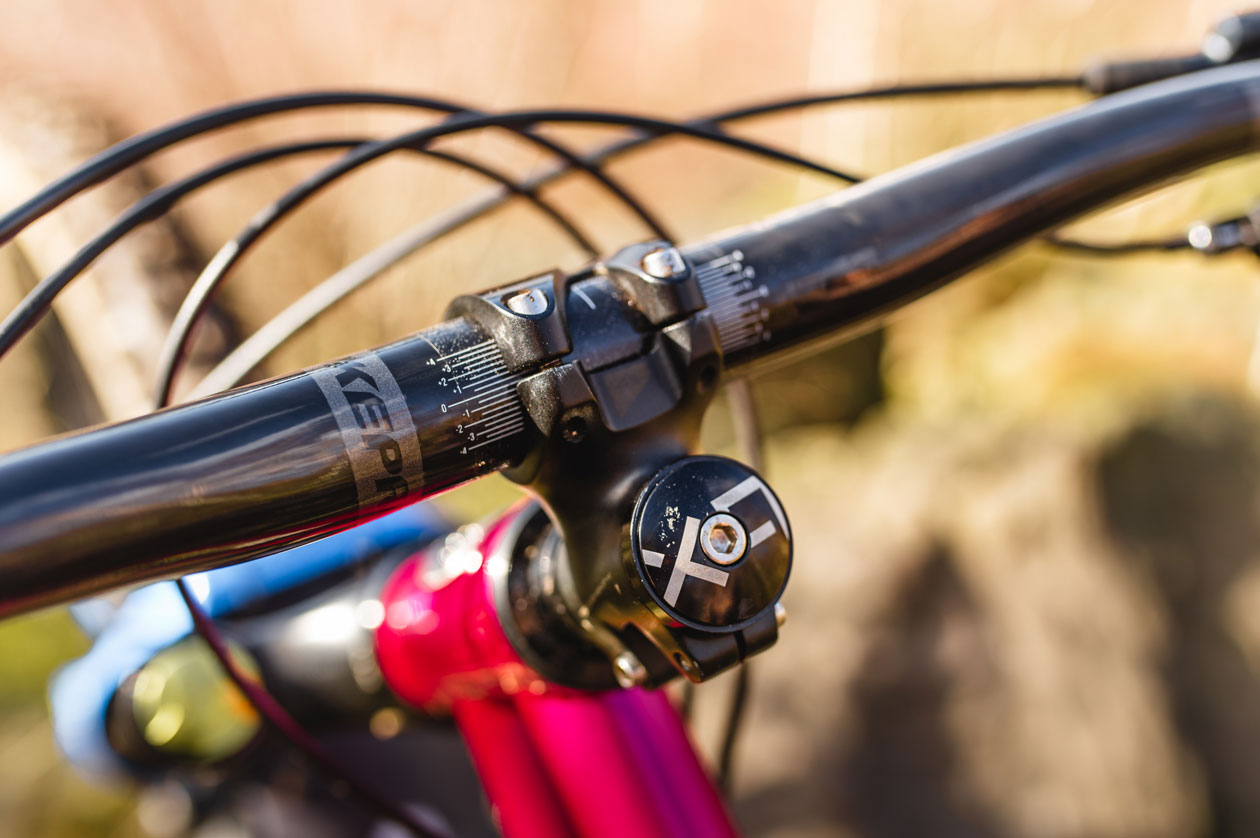 The carbon layup is primarily Unidirectional carbon fiber, which Nukeproof have oriented to offer the necessary strength and desired compliance whilst keeping weight at a reasonable, if not ultra-light figure. In the key clamping areas, a 3k woven fabric is added to the outer of the bar to improve damage resilience and reduce the delamination of the Unidirectional fabric when cutting the bars to length. Speaking of which, there are cut marks in 20mm increments down to 680mm. Also marked on the bar are lines for aligning the stem, which are visible from the top to allow for easier setup when on the bike. The bar is supplied in a clear coat “raw” finish, with some subtle silver graphics in place to give them some identity without shouting the brand name out loud. This clear finish lets you see all the small imperfections in the carbon below, which are near enough unavoidable when using a UD fabric, and will be well accounted for in the safety factors of the bar structure design. A grit coating is applied to much of the bar – under the grip, brake, shifter, and stem clamping areas – to reduce the need to clamp these down hard, lessening the risk of damaging the bar or allowing things to slip. THE DIRT
Nukeproof supplied a 31.8mm clamp, 38mm rise and 800mm width Horizon Carbon V2 riser bar for a couple months testing, which weighed in at 242g on my scales. They spent the majority of this test period mounted to the Pipedream The Full Moxie we were testing, giving them a good punishing across a variety of trails as we did our best to get into trouble to test the bike’s capabilities. Mounting them up was a pleasure, with the alignment marks making it easy to center them and figure out a good starting roll. The grit coating on the grip section required my tight-fitting grips to be given a good amount of persuasion in order to seat fully on the bars, almost negating the need for any torque in the collar at all. Under the brakes, this grit coating did wear away after I kneed the lever and made it spin around the bar, but this appeared to be exclusively cosmetic.

Once on the bike, the new shape of the bar looks great, with the subdued graphics adding a touch of class to the aesthetic. The 9-degree backsweep and 5-degree upsweep is a comfy number for my hands, but it was hard to perceive the effects of the offset sweep due to the lower bar fitted to the bike previously requiring a drop in the stem position that also pushed the bar a touch further forward. From the get-go, it was evident that the Horizon V2 Carbon bar is not an ultra-stiff bar that leads to teeth-rattling ride. Combined with the only 31.8mm stem we had to hand, which was admittedly on the flexy side, there was a noticeable amount of movement of the hands relative to the stem when riding. Not quite so much as to make alarm bells ring, nor enough to make anything feel overly vague, but there was certainly a similar level of sting reduction as the alloy bar that preceded. Over the course of a long and rough descent, or a day of enduro racing, this flex can only be a good thing, so long as it is not to the extent that limits precision as was the case for these. Whether the 35mm bar would feel the same is a good question, but you would assume that Nukeproof would be adjusting the layup to reduce the stiffness of this larger clamp bar to bring it in line with the feel of the 31.8mm tested. The Nukeproof Horizon V2 Carbon Handlebar is a solid offering for riders looking to shave a little weight from their front-end setup and avoid an overly stiff ride quality, whilst retaining some beer money over most of the competition.

Sean Leicht2021-07-09T12:04:01-07:00
Page load link
We use cookies to ensure that we give you the best experience on our website. If you continue to use this site we will assume that you are happy with it.OkPrivacy policy
Go to Top