Nukeproof began with some boutique components back in the 90’s in Michigan. After a bit of turmoil due to the bike boom, they were rescued and became the current Ireland-based entity thanks to Irishman Michael Cowan. Since then, they’ve grown from offering some downhill-focused components, to a full bike and component range for most disciplines, as well as a stacked line of apparel. This apparel range forms the focus of this review, with a couple of their Winter-focused Blackline products being put to work in the harsh Scottish winter. Read on to see how they performed.

We were sent a small sample of the Nukeproof range, which has grown in recent years to offer gear to cover a mountain biker from head to toe across the four seasons. The Blackline range is designed to offer no-compromise performance to support high performance mountain biking. Blackline 2.5L Packable Waterproof Jacket
The Blackline 2.5L Packable jacket is a fully waterproof and breathable jacket designed to pack small enough to fit in a pack or hip bag without issue. Rather than producing a jacket with an ultra-high waterproof rating, Nukeproof analyzed the needs of a mountain biker, and instead opted for a reasonable 15k waterproof rating from the 2.5-layer jacket, but crucially an impressive 30k rating for breathability. The 2.5L construction makes this possible, constructed with an outer DWR coated fabric layer to shed water droplets; an inner waterproof and breathable membrane; and a “half” layer with a thin PU coating to protect the membrane from clogging. To further boost the breathability, there are permanent underarm vents in place to let your ‘pits breathe.

The cut of the jacket is tailored for life in the saddle, with a long and sleek body with slightly dropped tail, and generous length sleeves with elasticated cuffs. A drawcord on the hem allows the jacket to be cinched down around the waist to help keep it in place, keeping the crud out of your waistband. The thin 2.5L construction allows for the packable element of the design, with the jacket folding away into the chest pocket and becoming an easy-carry item. A lanyard clip offers versatile portability when the jacket is stowed away, as well as allowing for the secure attachment of keys inside the pocket when riding. Two zippered hand pockets add to the storage options during a ride. The main zipper is a YKK unit with an Aquaguard cover to keep the worst of the crud and water out and features a generous toggle for easy opening and closing. The over-helmet hood can be adjusted to snug it tight around the head for when the worst rain comes. Blackline Winter Glove
Nukeproof’s Blackline Winter glove is designed to offer unrestricted shredding in colder temperatures. The gloves feature a windproof, waterproof and breathable top layer which should keep the elements out and some heat in. This is paired with a single-layer PU Clarino palm, which should maintain the feel of a warmer weather glove and avoid the vague feeling of some bulkier options. The forefinger has silicone print to increase grip levels, the thumb features a suede snot or glasses wipe, and both are designed to be touchscreen compatible. The cuffs are slightly higher than a summer glove, with a Velcro strap to adjust the fit.

The Blackline Winter glove is available in black with a choice of yellow or blue graphic colors in sizes XS-XL, and retail for £27/$35.95/€31.99. Blackline 2.5L packable Jacket – I try to keep my reactions pretty muted when I receive a new product to test, but it was a love-at-first-wear affair with this jacket. The cut is dialed all-round, the details are all taken care of, and the material feels premium with a soft touch. The sleeve length is generous, and though the cuff was a little looser than I’d love and looks a bit strange they stayed relatively well put. The hood just stretched over a helmet, though didn’t offer full coverage – I guess it’s always going to be hard to find a balance between a hood fitting and being too big, but I’d suggest this is a pretty decent compromise. The subtly dropped tail sat nicely, though a lack of any grip on the hem means that even when the drawcord is tightened, it still had a tendency to ride up a little when attacking. The packability is impressive, compressing down into its chest pocket quite easily and leaving it in a much less bulky and easy to transport state.

On the trail, the Blackline Packable jacket manages the buildup of pressure inside well, keeping things comfortable until temperatures begin to hit levels where the extra layer isn’t welcome or when efforts are the highest. I understand why Nukeproof opted for a fixed, minimal armpit vent on the Blackline, but I’d still like to see a bigger option to help vent further on the hotter wet days. It’s by no means a magical jacket that can prevent sweating but ranks among the best of them. With a short-sleeved layer below, the fabric on the sleeves manages to avoid feeling overly “clingy”. As is often the case, the perceived breathability of the jacket began to reduce over time, likely due to the membrane becoming clogged by dirt and minerals from my sweat, but a low-temperature wash with some re-proofer had it back to its best.

The DWR coating has lasted well, continuing to bead up rain after countless rides and rinses, and I’m yet to hit the point where the 15k waterproofing has been breached on areas that don’t see any pressure – under bag straps there was a small amount of seepage on the wettest days. The zip on the front did let in some water on particularly spray-heavy days, so it’s not entirely watertight, but this doesn’t tend to be the area that sees the most water so in order to reduce bulk it may be a worthy compromise. This zip did suffer from the classic “stick” caused by mud and grit from the trail, requiring a tug that threatened the durability of the stitching and toggle, but it didn’t present any issues and was rectified by a rinse after the ride.

The Blackline Packable jacket has fended off a few minor bails and countless battles with scrubs and scuffs on trees without so much as flinching, so I’d suggest there’s a good level of durability going on with the fabric, helping to make that £150 price tag seem quite reasonable. I’ve lost count of the number of times that riding buddies have said “I’d never spend money on a fancy jacket for riding as it’ll just get ripped up”, but I think the Blackline may offer enough fancy and durability for its reasonable price to justify it. Blackline Winter Glove – The gloves have a spot-on fit for my large wearing hands, avoiding any overly baggy portions but crucially retaining acceptable mobility. They’re not quite as “free” as a lighter weight glove but come damn close and had me reaching for them on days where I’d usually be inclined to risk it with a thinner glove to keep things feeling their best.

The warmth the Blackline Winter gloves offer is very welcome down to temperatures around 4℃/40℉, with the wind blocking nature taking the sting off on the body of the glove and the bulk of the fingers. However, the fingertips do feel a little exposed, with air finding its way through the stitching and letting things get a bit numb below this. The waterproofing is effective for puddle splashes and light showers, but I found in prolonged rain or with highly saturated trails the lack of waterproofing on the palm or between the fingers meant the water found its way in and the gloves began to feel heavy. It’s certainly better than no waterproofing, but not quite effective enough to be a good solution for the wetter rides, with the entire glove feeling quite cold once soaked. Regardless, they’re holding up well after countless rides in frankly brutal conditions, so much like the jacket it seems they’ve got quality levels that exceed their reasonable pricing. 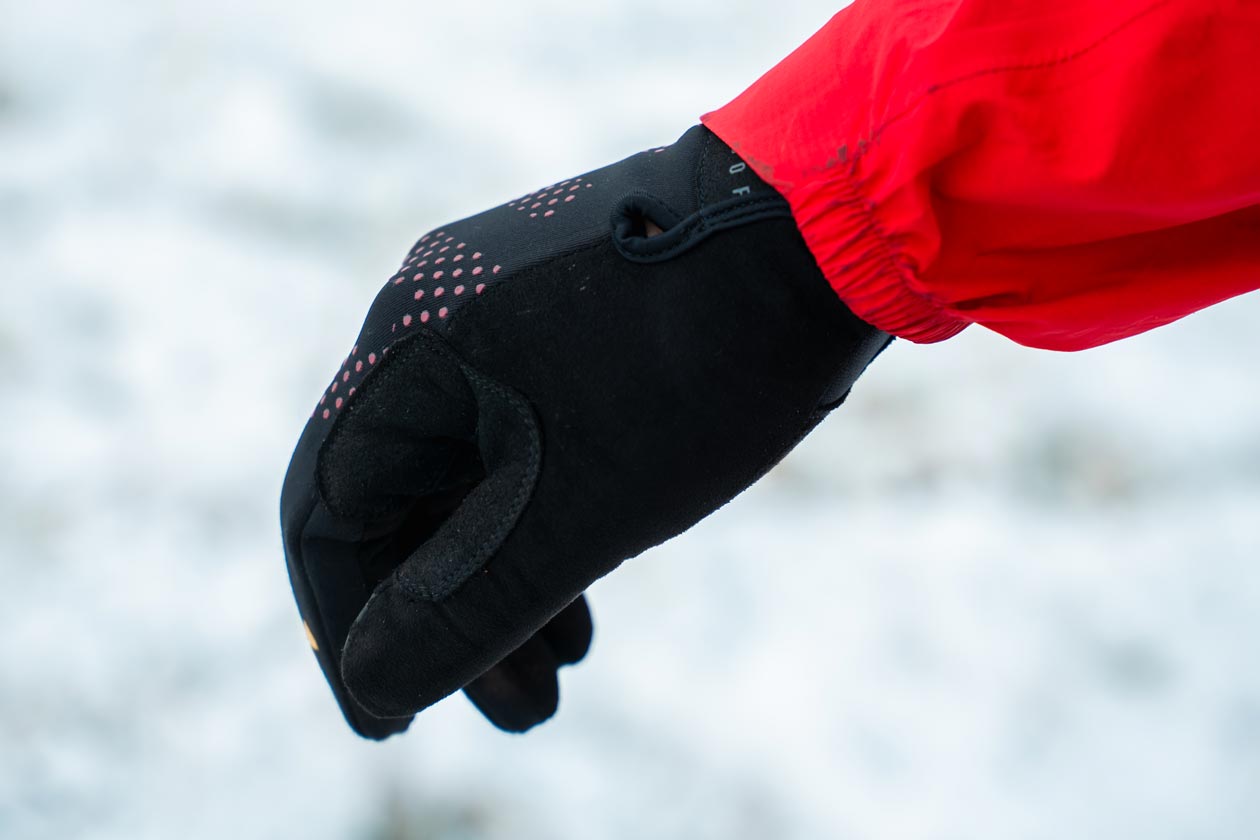 The obvious comparison to make is with 100%’s Brisker glove, which shares a lot of similarities including a similar retail price. They’re a dead tie in my books on the fit, bar feel and general warmth. The Nukeproof has a slightly longer cuff, and boasts a waterproof back, but as mentioned this waterproofing doesn’t extend to the whole glove and so only works at prolonging the time before water gets in. The much larger spread of color options on the Briskers may be enough to tip the balance their way for some, but you’d certainly not make a bad choice to side with the Nukeproofs.

Nukeproof’s Blackline Packable 2.5L jacket and Winter gloves offer stellar performance for reasonable money and retain durability and looks that would usually suffer as a result. I’d feel quite comfortable recommending both items for the right riders and look forward to continuing to get mine caked in the finest British slop.

Jacket zip let some water through
Gloves still get saturated