Editor’s Note: The terminology of clipless/clip in/clip pedals is very muddled these days, with many of the current crop of riders (myself included) getting into the sport in an era when nobody uses toe straps to secure their feet to the pedals. I’ll keep it consistent by using “clipless” for the purpose of this rant, but I’m not satisfied that it’s the best word for the job these days.

Up until the back end of last year, I’d been heavily influenced by the stigma against clipless pedals, and so had avoided ever bothering trying to ride with them properly on a mountain bike. “Flat pedals win medals” after all, and with some of my favorite mountain bikers building a career around riding flat pedals, I let myself miss out on the benefits of clipless pedals for an embarrassingly long time.

It was the fear of being stuck to the pedals in a crash that stuck out above the rest, with images of the viral “scorpion” crashes playing on loop in the back of my head. Adding to the fear factor were the SPD setups I’d tried in the past, with mechanism tension set so high that getting in was hard and getting out felt like it would be impossible in a time of need. As it transpires, I’d assumed incorrectly that the initial clipless adjustment period was going to be one full of pain and danger.

Thankfully my job means that some unsolicited items arrive at my doorstep to be tested for review, from time to time. When I was landed with a set of spd-style platform pedals and clipless shoes to test out simultaneously, I was left with no option but to learn. It seemed like it was going to be a baptism of fire onboard this clipless pedal setup, with some inconveniently timed heavy rain ensuring the trails of Aberdeenshire in Scotland were extra slick. However, much to my surprise, it took quite a few rides before the first incident occurred because of the clipless pedals. When the times (there were multiple in one ride) came, I quickly learned from my mistakes. However, in just a few months I went from being terrified of riding clipless pedals on the mountain bike at all, to hitting some of the bigger jumps and steepest tech of my life on them without thinking.

Am I a convert? Not exactly, flats still have a solid place in my heart. What I’ve confirmed for sure is that you can ride a mountain bike with either option just fine with the correct technique, however they both have their pros and cons and carry their own skillset that can improve your performance on the bike. I’ll break down the reasons why both types of pedals are so good below.

The biggest benefit on clipless pedals, for me, is the ability to apply power to the drivetrain while pulling up on the pedal, but not for the reason you’re likely thinking. Yes, there’s the theoretical benefit of increased efficiency or maximum power that they can produce, that’s great. But it’s the technical climbing and rough terrain pedaling improvements that really light my clipless fire. By relying less on stamping down on the pedals, and producing a more “round” pedal stroke, you reduce the amount of downwards force you apply to the bike as you pedal. This limits the amount of pedal bob that results on a full suspension rig, meaning your pedals stay higher off the ground. You can then pedal through rough terrain with less risk, increasing the potential speed for the race-focused, and reducing the likelihood of a pedal strike-induced crash for the rest.

Secondly, by being able to apply power to the pedals more consistently around the pedal stroke, you can reduce the peak torque on the tire that would encourage it to slip out on a patch of mud or a greasy rock, without reducing the overall power applied. I’ve found myself easily getting up technical sections of climb clipped in that I would struggle with on flat pedals, so it’s hard to convince myself to run a set of flats for the rides that I know will involve a lot of technical climbing. On the smooth fire road climbs, the supposed efficiency improvements are a moot point for me – the rest of my life riding on flat pedals means I can climb with flats just fine – but for some it’ll be a key bonus. Are there any cons for the clipless pedals on the ascents? Well, even though unclipping has become second nature for me, there’s no arguing that it’s easier to dismount the bike with a set of flat pedals when things go bad. Thus, for the most obscenely technical climb sections that are a struggle regardless of the pedal style, I still feel safer on a set of flats. There’s a bit of give and take here though, as you could argue that you would be more likely to successfully complete the section when clipped in, so overall it’s clear that clipless pedals are the smart choice for going up the hill.

When it comes to the descents, the main benefit of the clipless pedals, for me, is the ability to simply forget about your feet. Flat pedals can have you constantly repositioning your feet as you make your way down the trail, especially when you’re running a shoe and pedal combination that doesn’t “lock in” the grip like the best of them. Conversely, a clipless pedal will constrain your foot to the position set by the cleat when you’re clipped in properly. As long as your cleats are set to a suitable position, you can be assured that you’ll be safe and comfortable as you ride, letting your mind focus on the more important things like keeping it rubber side down. The benefits this provides on a hardtail are especially staggering, with the ability to reduce the reliance of weighting your feet to keep them planted on the pedals. This allows you to attack the terrain and really “ride the fork” to maximize your control, keeping your rear end light to save wheel damage and ankle pain.

Failure to clip in whilst you’re descending means that, unless you’ve got a shoe with some grip around the cleat track and a pedal with a platform (and ideally some pins) to support and latch onto the shoe, you’re not secure at all on clipless pedals. This is particularly unnerving to begin with, until you develop the trust in your shoe and pedal pairing, but flat pedals and shoes will usually offer more confidence when randomly stabbing your foot at the pedal after a dab on a tech section. Flat pedals also allow you to work the edges of the pedal to apply more subtle forces in different directions. I often find myself rolling my foot slightly around the pedal on an off-camber section of trail to increase the loading on the sideknobs on the tires, which isn’t possible in the same way on clipless pedals unless you unclip in advance. The skills and principles that handling a bike with flat pedals can teach you undoubtedly helps when it comes to riding the slipperiest off-cambers on either pedal type. 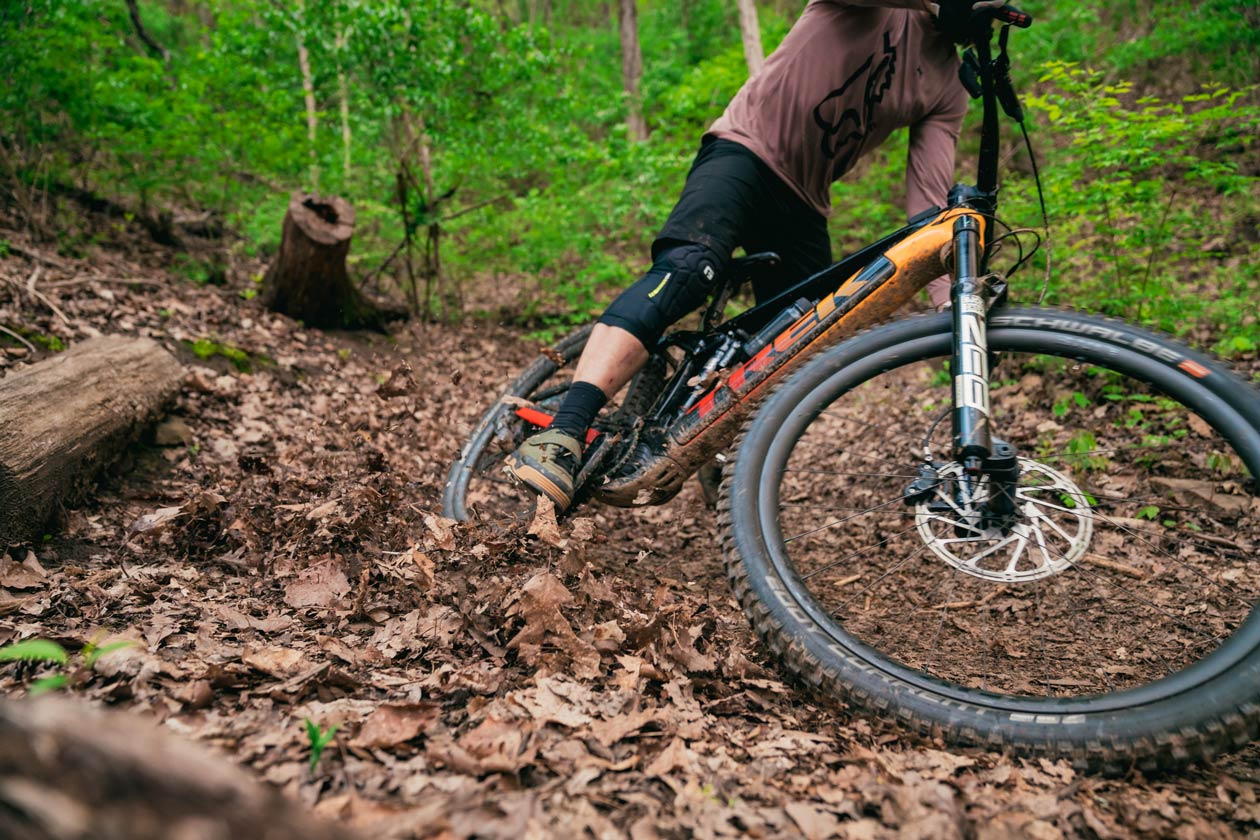 Additionally, because flat pedal shoes typically offer a little more pedal feel thanks to their more flexible soles, you get fractionally more feedback of what’s happening under the tires and can load the pedals more acutely, giving finer control over the grip. You may think that clipless shoes with less stiff soles could be a good answer for the perfect compromise, but some time in a pair of particularly flexible clipless shoes quickly pointed out the foot pain that can prevail thanks to the “hot spot’’ under the cleats.

It’s clear that there are real benefits to riding clipless pedals, and I’d highly encourage flat pedal die hards to try to borrow a set of pedals and shoes to give them a try, or simply bite the bullet on a quality setup for yourselves to reap the rewards.

However, this is not a rant sponsored by SPD. If anything, I feel more strongly about the need for devout Clip-stians to channel their inner Sam Hill and add some flat pedal riding to their repertoire. I’m talking to those who only know how to get their back wheel off the ground by pulling their legs up. Those who never hang a foot out on a flat turn and let off the brakes. There are a few moments of bike riding brilliance we would never have seen had it not been for a hung-out foot. Think Chris Kovarik on pretty much every flat corner he touches – the world deserves to see more of that. Flat pedal riding is still awesome, and you’re missing out if you don’t go both ways.