When Santa Cruz re-released the Heckler CC as an eMTB, it was to mimic their Bronson’s all-mountain capabilities, with the added juice of a Shimano EP8 electric motor. After a short stint, Santa Cruz updated the Heckler quite a bit, which we showcased in a recent Dissected feature video a couple month before heading out to our 4th Annual eMTB Shootout. We were lucky enough to get to know the new Santa Cruz Heckler CC eBike well on our home trails before bringing it to Knoxville, Tennessee to let the rest of the crew test it head to head against some of the best eBikes on the market.

If you want to see our detail-oriented Dissected feature showcasing all the updates of the new 2022 Santa Cruz Heckler, hit the link here. And, if you’re curious where this bike stacks up, be sure to watch our full length eMTB Shootout video.

Like many other brands at the shootout, Santa Cruz’s Heckler features the Shimano EP8 drive unit. It packs 85Nm of torque and is powered by an easily removable, integrated 720Wh battery and controlled through the EM800 bar-mounted display. The Heckler frame uses Santa Cruz Bicycles’ tried-and-true VPP suspension to deliver 150mm of rear travel. The medium to XXL sizes are offered in both MX and dual 29” options, whereas the small size is only available with 27.5” wheels on both ends. There are C and CC carbon fiber frame options to cater for budget and preferences, with the cheaper C offered in a choice of four basic spec levels and the lightweight CC gracing the top-spec build.

Our Santa Cruz Heckler CC XO1 AXS RSV MX build comes in at $13,299 and tips the scales at 49.85lbs. Santa Cruz specified this build with a Fox Factory 36 160mm fork paired with a RockShox Super Deluxe Ultimate rear shock, SRAM CODE RSC brakes and a SRAM AXS Eagle drivetrain, which is comprised of a mixture of GX and XO1 components.

We tested the Reserve carbon fiber rim-equipped build, with the 29” Reserve 30 front and 27.5” Reserve DH rear rims laced to a pair of Industry Nine 1/1 hubs. These are wrapped in a pair of Maxxis EXO+ Assegai/DHR2 tire combo as standard, but were equipped with eMTB Shootout sponsor Schwalbe’s eBike specific Eddy Current tires for consistency sake. Rounding out the build are the Fox Transfer Performance Elite dropper with WTB Silverado saddle; Santa Cruz e35 carbon handlebar and Burgtec stem. 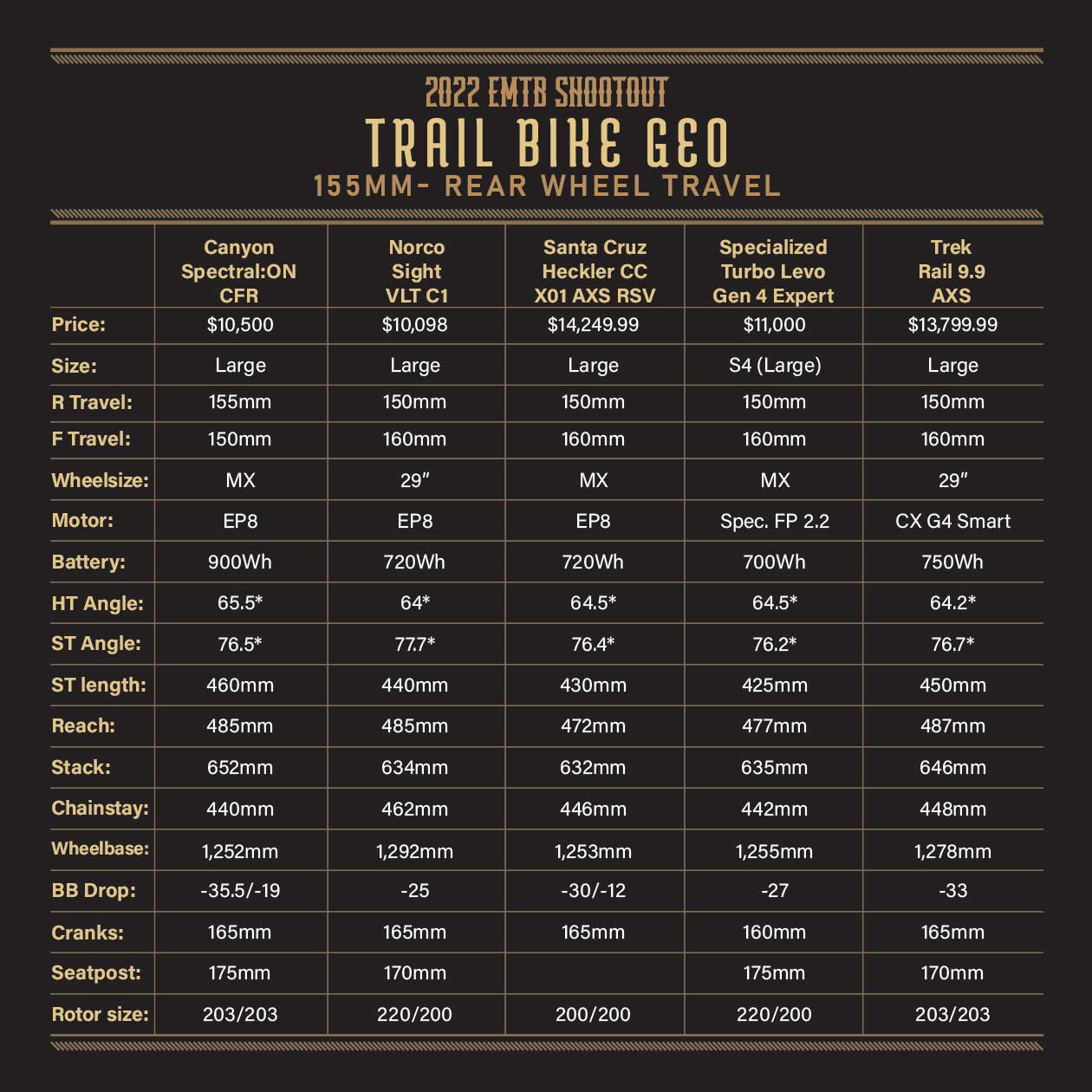 Geometry on the Heckler is relatively conservative, producing a slightly more agile bike than some others in the test, namely the Trek Rail. This more playful feel had us grinning from ear-to-ear on the mellower and tighter terrain. That said, it’s by no means a nervous bike when it comes to the gnarlier and faster stuff, finding a nice versatile middle ground that’s only overwhelmed when things get particularly fast and rough.

As we’ve come to expect from Shimano EP8-equipped eMTB’s, pedaling performance is solid on Santa Cruz’s Heckler. Assistive power is delivered in a controlled manner and has enough grunt to get up just about anything so long as you keep that front tire down and your body weight centered. That said, in its stock tune, the Heckler was not as punchy as some of the Bosch-equipped competition, requiring a bit more rider input when climbing up mid-steepness terrain or on technical trail features. The flip side to Shimano’s EP8 drive unit is that it feels a lot more natural in its assistance, which can result in less accidental wheelies or surges of power that take you off-line. The VPP configuration on the Heckler CC eMTB provides a firm pedaling platform which makes the bike feel faster and more efficient, especially when pedaling across traversing terrain.

The relatively compact geometry doesn’t produce a great deal of natural front wheel weighting when seated, meaning the Heckler requires a more engaged rider when trying to climb up steep and technical terrain. Shifting body weight, standing forward over the bars are two techniques we readily employed to get the Heckler up some of the more challenging climbs. The crank and pedal clearance is pretty good in the high position, thanks in part to the firm pedaling platform and the combination of mid-height BB and 165mm cranks, keeping one less thing on your mind as you ride. Unfortunately when it came to rough terrain – especially washboard rocks and roots – the noise of the Heckler CC began to ring louder and louder. We stopped to check and ensure the battery and battery latch hardware was still tight at least a handful of times. The rattle of the EP8 motor when disengaged is present on near enough every Shimano-equipped bike, but the volume at which it emits varies based on the frame construction and sound deadening. We believe the noise on our Heckler may have come more from the battery than the clutch, but it’s tough to really isolate the exact culprit. Either way, our new, but hard-ridden Heckler, was a very loud bike and the clacking began to detract from the ride a touch on the highest frequency bumps. If you can tune it out, which is no easy task, the noise doesn’t produce any other negative ride characteristics, but it’s worth mentioning as a problem with no simple solution that you may have to deal with.

At over $13k, the top-spec Santa Cruz Heckler CC XO1 AXS RSV MX’s price tag is as painful to read as the number of acronyms in its name, but for those who want to enjoy all the advancements and technology from top of the line components, this bike has them all. The Reserve wheels were some of the only on test that went without a single turn of the spoke key or so much as a “ping” of the spokes yet provided a snappy acceleration and acceptably comfortable ride – they truly are at the highest level of wheel durability. The SRAM AXS gearing cleans up the cockpit nicely and provided dependable gear changing throughout, and the mismatched suspension package performed wonderfully. Though we’d likely save the dollars by purchasing a cheaper spec and invest in a new shuttle rig or ride holiday instead, those with the deepest pockets can rest assured that their money is going into excellent components worthy of some serious abuse. The Santa Cruz Heckler CC is a trail eBike with aggressive riding on its mind. It sports an efficient and light feeling demeanor on the trail and is one of the best cornering bikes we’ve ridden. Those looking for the most comfortable and sensitive rig for choppy and rough terrain will be better served by others in the category. Similarly it isn’t quite as long, slack and stable as others like the Trek Rail or Norco Sight if you’re seeking out high speed chunk and super steep downhills. However, the Santa Cruz Heckler’s ability to pop, play and downright rip smoother trails and jumps means the Heckler is still a rig that our testers thoroughly enjoyed and one we regularly picked first when the trails were right.

VISIT SANTA CRUZ BICYCLES TO GET YOURS!